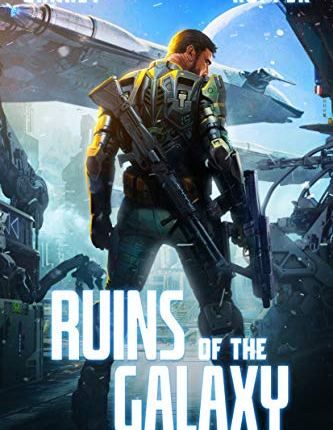 This is the 4th series by Chaney that I have started. It seems like each one is a veriation on a theme, but that is not a bad thing. I would be hard pressed to say which is my favorite series, but this one is defintently at the top.

I really like the universe that he and Hopper have created. There seems to be a lot of world outside of what you see in the narritive. the characters also seem to be fairly well developted and do show some growth throughout the story.

As the start of a series, this checks all the boxes. We are introduced to the main players. We start to learn about the verious plot lines that run through the story. In the end, there is just enough resolution to wrap up the book, but plenty of room for the next one. And above all, I want to pick up the next book and see where things go from there.

Over all, a great read, a good start to a new series and a solid work from Chaney and Hopper. I give it a 5/5.

I came across this article on the New Scientist’s website.  It has to do with the future of space exploration.  The writers look at both sides of the argument, and I think they make some really good points.  I think they miss the most important fact, however.  Space exploration is falling into the back ground because the kids today don’t care.

What kids think has a lot to do with where our nation goes.  Companies discovered a long time ago that if you want to sell your product, sell it to kids.  They’ll drive their parents nuts till they get it.  It has more to do than just selling a product however, the kids of today are the adults of tomorrow.

The astronauts today grew up with people like John Glenn and Neil Armstrong as heroes.  They watched the first moon landing when it happened live.  The space race of the late 60’s and early 70’s is what shaped their futures.  Their world was shaped by their dreams of life in space.

It’s not the same today. Ask some of the kids today who was on the last Shuttle, and they couldn’t tell you.  Truth be told, I couldn’t either.  It seems like the only time they talk about a shuttle launch is when it doesn’t happen.  Space does not capture us like it once did.

At first, space was exciting.  It was new.   It was the next great frontier.  All the people involved were rock stars.  If you couldn’t make it as an astronaut, then you could try and be one of the scientists that make the rockets fly.  There was glamour about the whole program.  It was something to make people dream, and strive to make those dreams come true.

Today, it’s a different story.  Michael Hanlon in the article says it best:

Another big problem is the legacy of some terrible decisions that left NASA with the expensive, dangerous space shuttle and a white-elephant space station that manages the feat of making space seem as dull as cardboard. The whole thing is a mess.

Space does not capture us like it once did.  The men and women of NASA are not heroes, they are robots, and not even the cool kind.  They are machines that do a job.

I know this is how it needs to be to keep everyone safe.  I am not even saying that all of this is the fault of NASA or the government.  I am just pointing out the truth.  We don’t have any real space cowboys anymore.  If we do, no one is making a big deal about them.

I think the heart of the problem is found in the children and the world that they live in.  What made the early space program so romantic was the adventure.  These people were going into space.  No one had been there before.  We really don’t know what they are going to find.  We don’t even really know if this all will work.  It was a huge adventure.

The adventure of space travel sold because people back then loved adventure.  It wasn’t about money, it was about being on the edge.  It was about pushing the envelope.  It was about seeing how far we can push ourselves, and then trying to go further.

Today, it’s all about money.  It’s about fame.  Kids today have a very different kind of hero.

Something has been lost.  Kids today don’t seem to care about the things that the past generation did. They don’t see the world the same way.  The worst part about all of this is the fact that more than just space travel has been lost.  I think if things continue the same way, we will see fewer and fewer scientists and teachers.  Everyone will be looking for the easy road to make it rich.  Money will be the only thing that people care about.

If we want to see things like space travel continue, then we need to reach the kids.  We need to show them that there is more to life than sports and video games.  That there is a world outside that they have never dreamed of.  We have to show them what adventure really is.  We need to awaken the dream with in them.  If we don’t, then we have lost everything.